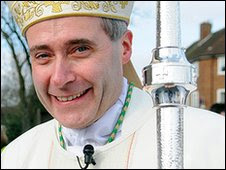 
" ... Dr. John Sentamu, the Anglican Archbishop of York, was accused of 'exaggerating' when he spoke of the Government’s proposals to re-define the identity of marriage as linked to a totalitarian mentality (The Daily Telegraph 31st January 2012). Yet his analysis of recent history is clearer than that of many of the leaders of opinion in our society."

Bishop Davies suggested in his sermon that the Cameron/Clegg government is attempting to turn the clock back to pre-Christian times and to discard the Christian inheritance of faith and morality as if it had never existed. He said:


"If Christianity is no longer to form the basis and the bedrock of our society then we are, indeed, left at the mercy of passing political projects and perhaps even the most sinister of ideologies."

Bishop Davies is right to refer to totalitarianism when speaking of the Government's plans with regard to same sex marriage. To understand why, consider the far-sighted reflection of another world Catholic leader, Cardinal Pell, who recently published his submission to the Australian Senate’s Legal and Constitutional Affairs Committee. Zenit, the international news agency, reports:


[Cardinal Pell] said that the Commonwealth of Australia must continue to recognise and support marriage as meaning the exclusive and permanent union of one man and one woman.

Some proponents of same-sex marriage have argued that in the event of marriage being redefined, the Catholic Church and other religious communities will be protected or exempted from being required by law to perform same-sex marriages.

Cardinal Pell commented that such proposals fail to understand the immensely powerful role and influence of the law in our society. Changing the Marriage Act would, in practice, compel Catholics and other faith communities to recognize and accept same-sex marriages in their schools, social welfare, health care and adoption services, he pointed out.

When we permit same-sex relationships to mimic marriage we also say that a child gains no benefit from the knowledge that they were created through an intimate act of love between their parents, Cardinal Pell said.

Cardinal Pell's words to the Australian Senate totally apply to David Cameron's claim last week that church law will not be affected by extending civil marriage to same-sex couples and that his proposals would “change what happens in a register office, not what happens in a church”.  Not so, according to the European Court of Human Rights (ECHR). Whereas the ECHR (in a recent ruling concerning a lesbian couple in France) ruled that there was no obligation on member states' governments to legalise same-sex marriage, the judges also said:


"Where national legislation recognises registered partnerships between same sex, member states should aim to ensure that their legal status and their rights and obligations are equivalent to those of heterosexual couples in a similar situation."

As Neil Addison, a lawyer, pointed out in the media:


"Once same-sex marriage has been legalised then the partners to such a marriage are entitled to exactly the same rights as partners in a heterosexual marriage.

"This means that if same-sex marriage is legalised in the UK it will be illegal for the Government to prevent such marriages happening in religious premises."

One does not need the powers of an Old Testament prophet to understand the pressures which will be brought bear on parents and on educators not to teach children that marriage is the permanent, exclusive union of one man and one woman, or not to teach that same-sex marriage lacks basic elements of real marriage - for example the complementary sexual difference between spouses necessary for the procreation and healthy upbringing of children.

Thus the right of parents to be the primary educators of their children will be further undermined - a right written in to the Universal Declaration of Human Rights specifically in the light of the Nazis' attempt "to turn Germany's renowned educational system into a mechanism for indoctrinating the young with the government's programme". (See Professor Mary Ann Glendon's authoritative book on the Universal Declaration of Human Rights A World Made New.)

Bishop Davies's comments are timely and worthy of wide dissemination and further study.

Readers of my blog in Britain may like to apply for flyers to take our message about real marriage to the general public, door-to-door and on high streets throughout the UK.

*Real marriage as an institution protects children, both born and unborn. Statistics show that unborn children are much safer within marriage than outside marriage. For more information see SPUC's position paper and background paper on same-sex marriage.