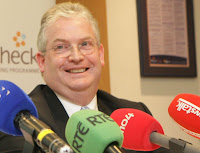 Tony O'Brien (pictured), one of the leading campaigners for the legalization of abortion in Ireland, and formerly chief executive of the Irish Family Planning Association, has been appointed Director General of Ireland's Health Service Executive. The Irish Family Planning Association is, of course, an affiilate of the International Planned Parenthood Federation (IPPF), the world's largest abortion-promoting agency.

Thus, IPPF has its feet firmly under the top table of Irish government. Read the blogpost of Pat Buckley, European Life Network Ireland director, for further information about the implications of this appointment and pro-lifers' dismay.

Last year IPPF launched It's all one curriculum. A quick review of that document shows the kind of policies which the Irish government might reasonably expect an IPPF man to promote as director general of Ireland's health service executive. I urge all Irish citizens, and all those who love Ireland, to read my earlier post on it.

It tells you everything you need to know as to what utterly corrupt and corrupting policies, targeted at young children, to which at least some in the Irish government appear to want to sign up.

The big question now is: Will Catholic church leaders stand up and be counted - in Ireland, or in Rome - and try to stop what is almost certain to happen to the Irish people unless they act?

Accommodation of the pro-abortion lobby, as we saw in 2009 with Archbishop Rino Fisichella, hasn't worked. It's simply served to embolden the most powerful political leaders in the world - Obama in the US, Blair and Cameron in Britain - who know that they can promote their abortion policies without fear of disapproval.

It's time to take Catholic doctrine on the sanctity of human life, on the duty to oppose the scandalisation and corruption of young people, off the shelf; shake off the dust on the pages which has accumulated after decades of lack of use; it's time to get up in the pulpits and out in the public square; it's time to speak the truth and to defend this generation's families and children - just as the Scottish bishops have done so well over the years and in recent weeks.

As my pro-life colleague in Ireland, Pat Buckley, said to me recently:


"Until now Ireland's fidelity to the Christian faith has helped it stand almost alone in Europe in prohibiting abortion.  At the same time it has led the world in the reduction of maternal mortality.  For both these reasons Ireland is hated by the forces of the culture of death which are preparing the imminent destruction of its pro-life laws."

The pro-life groups in Ireland are doing what they can. Will the Church speak out? will they help them?