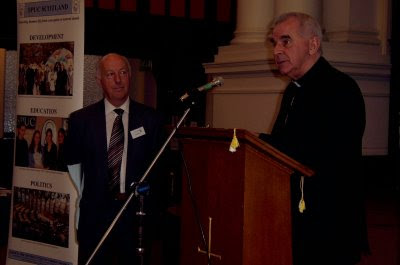 Yesterday I had the great privilege of introducing Cardinal O'Brien (pictured above with Ian Murray, SPUC Scotland director), the archbishop of St. Andrews and Edinburgh, as the principal speaker at SPUC Scotland's packed conference in Glasgow. "I am one of the many thousands of people in Britain and around the world who's very happy that this priest, born in Northern Ireland, was made a cardinal by Pope John Paul II", I said.


Cardinal O'Brien addressed his words to all people of good will, saying: "We must consider more the role of conscience and its link to the truth. For those of us here who are Catholics, our church is signpost for consciences and others look to us as a signpost for conscience. People of other faiths have said - thank God for the leadership you have given in our country" (a sentiment echoed by George Bell, a leading pro-life evangelical who attended the SPUC Scotland conference).

Referring to this year's 60th anniversary of the Universal Declaration of Human Rights, Cardinal O'Brien said: "The harsh reality is that the noble words of so many high blown declarations have been matched with a barbaric indifference to the rights of the unborn."
He praised the work of the Society for the Protection of Unborn Children saying: "SPUC has worked tirelessly in Scotland and the UK to fight the evil of abortion for almost 40 years but we must recognise that what really can be described as the forces of darkness have distorted the laws and consciences in our nation and that our situation is now worse than ever."
He went on: "I'm here to strengthen the resolve of SPUC and I hope that they and other pro-life groups will extend their message more and more in the world in which we live."
On Wednesday, MPs voted by 355 to 129 in favour of the Human Fertilisation and Embryology bill in their final vote on legislation which enshrines and extends the creation and abuse of human embryos outside the womb.
Cardinal O`Brien told his audience in Glasgow: "I called on our Members of Parliament to search their hearts and their consciences over the summer months to decide whether or not the value of human life really matters or is it simply one more commodity to be cast aside in our throw-away society."
The Cardinal said that while it was "a small mercy" that extreme pro-abortion amendments to the Abortion Act were not considered by MPs , the reality remains that the vote was a tragedy for Britain. "As a direct consequence of this legislation the value of human life will be eroded even further in the United Kingdom", he said.
The cardinal continued: "We live in the shadow of a spiritual problem ... The descent to the culture of death has come when God has been pushed aside ... We can apportion blame and lament inaction ... Those acting in our name reflect the society from which they come. Our ongoing battle should not be just with the elected but also with the electorate ... We cannot allow the fight for life to be perpetually politically focused - placing MPs as the ethical arbiters of all that we do ... If we reach out to our fellow-citizens one by one we can create a culture of life regardless of the laws ... We cannot let up in any way with regard to the law ... We must keep all of our campaigns going.

In spite of his hectic schedule, the cardinal stayed for the entire conference. He listened intently to a delegate (right) putting a question to Lynn Murray who spoke about the "culture of fear" surrounding expectant mothers as a result of the government's promotion of screening tests for disability.
Lynn Murray's fourth child, Rachel, has Down's syndrome and the fact that a baby has Down's syndrome is now being treated in hospitals as a death sentence for the baby. Rachel is now at the local secondary school and she's doing well. She's learned to read and write and "She knows everything that's going on" her teacher says. The disabled need to become their own advocates in the fight for life, Lynn Murray urged in a compelling, informative, talk.

Also speaking at SPUC Scotland's conference were Cathy McBean and Lucy McCully (pictured, right). Cathy manages the work of British Victims of Abortion and Lucy McCully, SPUC Scotland's Education Officer, spoke on youth pro-life activism and the international pro-life youth conference she's organizing on behalf of the Society in March next year.
Lucy's vibrant, forward-looking, presentation is a testament to the work of Ian Murray, SPUC Scotland director, who retires next year and who received a standing ovation from the conference. I was pleased to have the opportunity of thanking Ian, on behalf of the Society, for over thirty years work for the Society as a volunteer in SPUC's Dumbarton branch, as finance director and general secretary of SPUC in the UK, and as SPUC Scotland director. "Ian has taken the work of the Society the forward significantly in every role he has undertaken for SPUC", I said. Ian made clear that the pro-life movement was a lifelong commitment and he would be continuing to work for SPUC as a volunteer.
at 17:16