"I will not implement the Abortion Act" says Northern Ireland minister 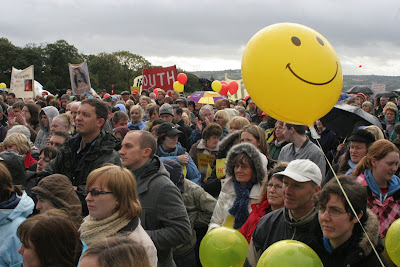 Jeffrey Donaldson MP MLA (Democratic Unionist Party MP for Lagan Valley, Junior Minister in the Office of the First Minister and Deputy First Minister (OFMDFM) in the Northern Ireland Executive), pictured below, spoke last Saturday to thousands of people from all over Northern Ireland and the Republic of Ireland at a rally in Stormont, organised by Precious Life, against the proposed imposition of the Abortion Act on Wednesday this week in Westminster: "If Westminster imposes the Abortion Act, as a minister I will not implement that law".

Jeffrey Donaldson, who is chairman of the All-Party Pro-life Group of the Northern Ireland Assembly, went on to say:

"Our opponents say that this issue is about equality. Well, where is the equality for the people of Northern Ireland when they can have no say over legislation that they don't want? The Good Friday Agreement, the Belfast Agreement says that all legislation in Northern Ireland must have public consultation. There must be an impact equality assessment. Where is the public consultation?" 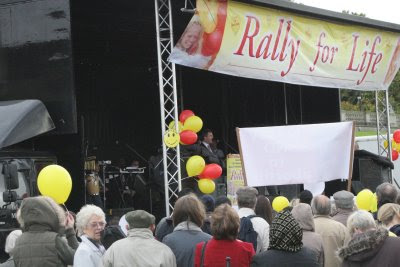 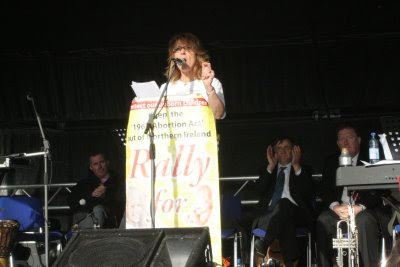 "Abortion in Northern Ireland" she said: "Never, never, never. Ulster says no to abortion! We will not be silenced. That there are so many people here today shows the majority in Northern Ireland do not want abortion to be socially acceptable. Thank you for affirming publicly that human life is precious. I believe it is the duty of government to uphold God's law. We need to fast and pray in the coming days. In 2006 98 percent of Abortions in England and Wales were for social reasons. Only 0.4 percent were for a risk to the life of the mother. Abortion at any stage of pregnancy is the taking of a human life. Stand with me. A majority of people must have the moral conviction to say not in my name!" 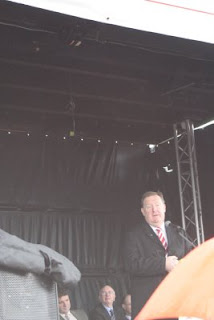 Pat Ramsey MLA (pictured right) SDLP, representing the Foyle constituency, welcomed people attending the rally from all over Ireland including a delegation from Cork. He spoke about the joy a child brings into the world. Pat Ramsey recently said to an Irish Catholic newspaper that the imposition of the Abortion Act by Parliament in Westminster could threaten to bring down the Assembly which is already in difficulties over justice and policing powers.

Bernie Smyth (pictured below), the leader of Precious Life organising the rally, introduced Grace Kelly Smyth, her grand-daughter. She was born two days beyond the time limit for social abortions, she had to have eye surgery and needs oxygen everyday. 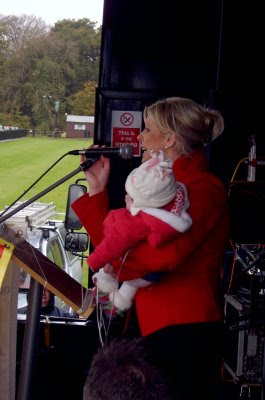 Joe Scheidler, (pictured right) national director of the Pro-Life Action League in Chicago, USA, gave testimony to the inspiration Northern Ireland gives to the people of the world, with its courageous stand in defence of the sanctity of human life.

For me the most moving speakers of the day were Lynn Coles (picture below left), of Silent No More, who spoke about her abortion experience, and Dr Sean O'Domhnaill (pictured below right), a psychiatrist and vice-chairman of the Mother and Child campaign in Ireland, who spoke about the gift of nine months and nine hours of life of an anencephalic baby whose birth he attended. 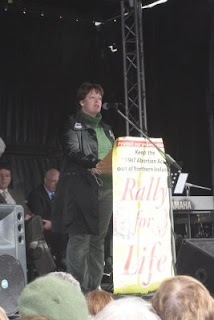 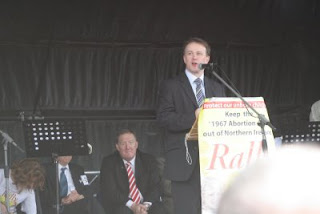 I spoke (pictured below, centre, with (L to R) Jeffrey Donaldson, Iris Robinson, Pat Ramsey and Dr Kieran Deeny) about how Northern Ireland's politicians and people had shown the world how to resist abortion - with determination and intelligence. The might of international institutions, the European Parliament, the Council of Europe, the mis-named Committee for the Elimination of Discrimination Against Women, all seeking to promote abortion in Northern Ireland and elsewhere in the world, had failed to overturn the weight of public opinion, and the strength of the political leadership in Northern Ireland, which steadfastly oppose the killing of the unborn. They had looked at pro-abortion politicians - Diane Abbott, Evan Harris and David Steel - in the eye and told them that they lied about backstreet abortion, when Northern Ireland has the lowest maternal death rate in the UK. 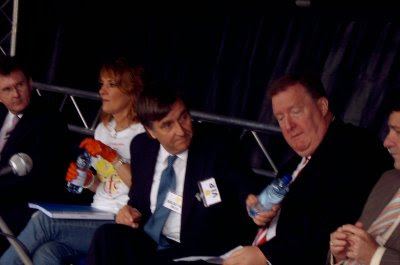 Liam Gibson, SPUC's Northern Ireland development officer, whose family have led SPUC's battle in Northern Ireland since 1981, paid tribute to Bernie Smyth and Precious Life for their bold and successful initiative in organizing the rally in Stormont. Commenting on Jeffrey Donaldson's speech (see above) he said:

"The Northern Ireland Act which implements the Belfast/Good Friday Agreement requires all legislation in Northern Ireland, even when it's introduced by the Northern Ireland Office (that is directly from Parliament) to be approved by the Assembly. It must be scrutinised for its implications for equality. This is done through a public consultation and an equality impact assessment. This is the case no matter how unimportant the legislation is. If the Executive or a majority in Assembly hold up the introduction of the Abortion Act or refuse to implement it at all, it will result in a major constitutional dilemma which the Gordon Brown would have to deal with. It could even call into question the future of the devolved institutions when they are already under pressure. It is crucial that MPs in England, Scotland and Wales realise just how important this issue is in Northern Ireland."
at 06:08