Tony Blair Foundation collaborates with worldwide attacks on the unborn

I have been in in recent days attending two international pro-life meetings addressing several immediate threats to unborn children:

At 's Campaign Life Coalition's international conference, I met John-Henry Westen (pictured right) and his LifeSiteNews team. I explained how Tony Blair, recently received into the Catholic Church, and his Faith Foundation was undermining Catholic teaching on the dignity and inviolability of human life. In a disturbing development, the Tony Blair Faith Foundation has teamed up with the Faiths Act Fellowship to promote the Millennium Development Goals. The Faiths Act Fellowship works with World Vision which is calling for abortion on demand to be legalised in the world's poorest nations - which was also, for Tony Blair's government, central to the attainment of the Millennium Development Goals, as I have previously pointed out. 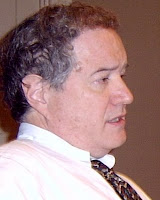 At the International Right to Life Federation board meeting, Mr Bill Saunders, senior fellow and director of the Family Research Council's Center for Human Life and Bioethics (pictured left), said that, if Senator Barack Obama is elected president, it will be Armageddon. Mr Obama's first action, if elected, would be to sign the Freedom of Choice Act, which is more radical and far-reaching than the infamous Roe v. Wade supreme court decision which in 1973 legalised abortion throughout the nine months of pregnancy throughout the . If Roe v. Wade were revoked, the Freedom of Choice Act would overturn every state law against abortion. All of Mr Obama's appointments at the UN would be pro-abortion. At least two supreme court justices will be appointed during the next presidential term. If Senator John McCain is elected, whoever he picks will be better than the incumbents. If Senator Obama is elected, his choices will be worse.