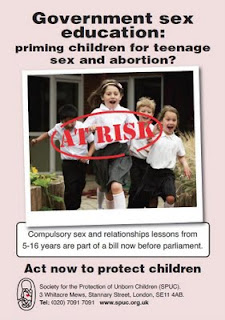 Not since the Abortion Act 1967 has there been such a determined effort to promote universal access to abortion, seeking to expand abortion access for children under the age of consent without parental knowledge or consent. It is vitally important that parents, teachers, clergy and all concerned with protecting children both brief themselves and take immediate action to oppose the government's plans.

The Catholic Education Service (CES)'s general support for the government's plans is a disgrace. The CES must resist this most terrible attack on unborn children, young people and the rights of parents as the primary educators of their children. Anything less will be a historic betrayal. Without a total reversal of policy, Catholics may well feel that not since the 16th century reformation would have Catholic bishops so supinely capitulated to the demands of the state. The government's intentions are so blatant that we can be in no doubt as to the pressures on Catholic schools and as to the dangers in store for children and young people if this legislation is passed. Pope Pius XI wrote in his famous 1937 encyclical against Nazism:


"We address Our special greetings to the Catholic parents. Their rights and duties as educators, conferred on them by God, are at present the stake of a campaign pregnant with consequences. The Church cannot wait to deplore the devastation of its altars, the destruction of its temples, if an education, hostile to Christ, is to profane the temple of the child's soul consecrated by baptism ... Then the violation of temples is nigh, and it will be every one's duty to sever his responsibility from the opposite camp, and free his conscience from guilty cooperation with such corruption. The more the enemies attempt to disguise their designs, the more a distrustful vigilance will be needed, in the light of bitter experience ... [D]o not forget this: none can free you from the responsibility God has placed on you over your children. None of your oppressors, who pretend to relieve you of your duties can answer for you to the eternal Judge, when he will ask: 'Where are those I confided to you?' May every one of you be able to answer: 'Of them whom thou hast given me, I have not lost any one' (John xviii. 9)."


Please act now to challenge the government's pro-abortion sexual health agenda in schools. Please:
I'm grateful to Norman Wells and the Family Education Trust for their permission to reproduce extracts from their latest update on the government's sex education plans:


"The Qualifications and Curriculum Development Agency (QCDA) [held a consultation] as part of the government's larger consultation on Curriculum Reform. The QCDA report on consultation responses reveals that over two-thirds (68 per cent) of respondents disagreed with making PSHE education a statutory subject, and 79 per cent agreed that parents, carers and guardians should be allowed to maintain the right to withdraw their children from the sex and relationships education element of PSHE education. When the full 12-week consultation did not deliver the results the government had hoped for, in October it quietly commissioned a survey of 1,791 adults and 1,661 parents and asked some leading questions aimed at securing a semblance of public support for making PSHE education statutory and for limiting the right of parents to withdraw their children from sex education. The government conveniently ignored the results of the public consultation and chose to give greater weight to the October survey than to the full public consultation.

"Dr Trevor Stammers, a trustee of the Family Education Trust, debated the government's proposals for sex education with Gill Frances, the Chairman of the Teenage Pregnancy Independent Advisory Group on a recent edition of the BBC Radio 2 Jeremy Vine Show. In the course of the interview, Jeremy Vine asked Gill Frances whether young people would be taught to value their virginity in sex education classes. His question was met with a stunned silence. Struggling to regain her composure, Gill Frances said she could not answer that, adding that the subject would be taught 'in a framework of values', and that sexual activity should take place in 'mutual relationships - never coercive', 'in trust with each other'."