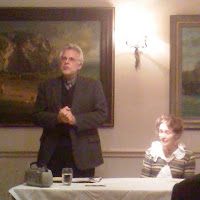 Wesley J. Smith, a leading American bioethicist, addressed anti-euthanasia activists last night at the Cadogan Hotel, London. Anthony Ozimic, SPUC's communications manager, was there and he has sent me a picture (right) and the points below from Wesley's talk. Wesley is pictured with the Dowager Marchioness of Salisbury, who kindly hosted the meeting. Mr Smith told the meeting:
Do read Wesley's excellent blog Secondhand Smoke for more about his UK tour.