I wrote earlier this week about the 4th international pro-life congress held last weekend in Saragossa (Spain), at which I had the honour of delivering the closing address. 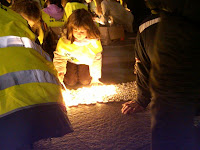 I am grateful to Bob Lalonde, who heads up the international work of Priests for Life, for sharing with me one of the pictures (right) he took of an impressive act of witness which took place over the weekend: a million candles for life, representing the one million babies killed under Spain's abortion law. As Bob said to me, and as evidenced throughout the Congress, the vigour and the imagination of the Spanish pro-life movement are most impressive.

A number of readers have been asking me for further details of the "Truce of 1968", through which a false doctrine of conscience has undermined the Catholic Church's doctrine on the transmission of life in Humanae Vitae. I spoke about this in my closing address (which is available in English,  Spanish and Italian).

George Weigel writes about the "truce of 1968" in The Courage to be Catholic published by Basic Books; and the facts of the case can be studed in The Vatican Collection, Vatican Council II, Volume 2, More Post Conciliar Documents, General Editor, Austin Flannery, O.P..

I'm pictured here at the Saragossa conference with Bob Lalonde (r-h) and with Mrs Pilar Gutierrez (centre), the co-ordinator for Priests for Life in Spain. 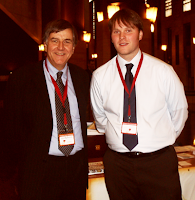 And here I am with Joe Lee, SPUC Scotland's newly-appointed development officer, who joined me for the Congress in Saragossa. He was promoting SPUC's international pro-life student conference in Glasgow next March, as well as sharing with our international pro-life colleagues SPUC's most recent publications for doctors.

I'm also photographed with Marlene Gillette-Ibern (l-h), a pro-life lawyer from Puerto Rico, and Esperanza Puente (centre), one of the most effective voices in Spain, especially in the media, where she speaks out powerfully and courageously about her personal abortion experience.