SPUC Northern Ireland never gives up in the marathon for life 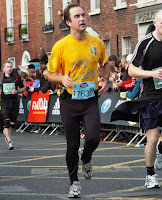 I want to congratulate SPUC Northern Ireland for all its hard work which made SPUC's court challenge successful yesterday. Pictured is Aaron Doherty of SPUC Northern Ireland, who ran the Dublin Marathon on 26 October to raise funds for our case. Aaron, 44, from Portstewart, is married to Helen, and they are blessed with three children. He is a swimming instructor, an events officer with Coleraine borough coucil and a part-time photographer. Aaron typifies SPUC Northern Ireland: never giving up, straining to finish and win the race, using every effort to stop the pro-abortion lobby from extending the culture of death to Northern Ireland.

Liam Gibson of SPUC Northern Ireland has explained to me the significance of yesterday's court judgment:


"While yesterday's ruling will require careful consideration, it is already clear that it is a significant victory for the pro-life cause. The judge's comments on the questionable legality of so-called non-directive counselling will have serious implications for agencies which act as conduits to abortion centres in England. Helping to procure an abortion that would be considered criminal in Northern Ireland may well now lead to a prosecution.

"However, it is in the area of freedom of conscience, protected by Article 9 of the European Convention on Human Rights, where this ruling may be most widely influential. Lord Justice Girvan considered that the Department of Health was wrong to tell doctors that they had no legal right to refuse to take part in the termination of pregnancy.

"He concluded that there were a number of circumstances in which medical personnel may have a legal right to refuse to take part in abortion procedures. He said:


'[I]t may be that a member of staff could succeed in a particular case in establishing that to require him to assist in the procedure would infringe his Article 9 rights. This may depend on the express terms of his contract which may require him to participate. If it does a question may arise as to whether the imposition of such an obligation itself infringes the Article 9 rights of a member of staff.'


"This may well strengthen the case of doctors and nurses in the rest of the UK who are coming under increasing pressure to facilitate abortions.

"The fight against this guidance has taken a considerable effort on the part of the whole pro-life lobby in Northern Ireland but it could not have been achieved without the help of the pro-life movement in the rest of the UK and Ireland and as well as medical and legal experts in the US and Australia. Hopefully this success will encourage those fighting abortion far beyond Northern Ireland. The next task facing the pro-life movement within Northern Ireland is to consolidate this victory so we can continue to build a culture where every human life is respected and protected."