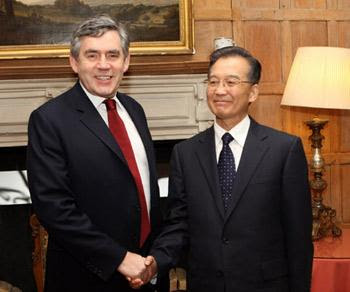 I would like to express my deep sympathy to the family of Akmal Shaikh, said to have suffered from a mental illness, following his execution in China as a convicted drug smuggler.

His family have written to The Guardian newspaper criticising the British government, saying:

"Did the British Government pull out its diplomats in protest? Did it have a hard-hitting strategy to persuade the Chinese authorities to change their decision?"

"This is an example of Britain's powerlessness in the world."


I think there's a lot of truth in what they say. When Wen Jiabao, China's premier, visited the UK earlier this year, Gordon Brown (pictured above with Wen) set a target of doubling British exports to China in the following 18 months, from £5bn to £10bn, in order to help lead the world out of recession.

Britain's powerlessness - and the European Union's which made repeated calls for the death sentence to be commuted - reflects, in my view, its moral powerlessness. Quite apart from any other considerations, why would China heed the representations of western governments which are giving so handsomely to its forced abortion, one-child policy through their funding of the United Nations Population Fund (UNFPA)? (Three months ago, the European Parliament voted  against pro-life amendments to stop EU money being spent on coercive and sex-selective abortions.)

This is the China where earlier this year, Zhang Minan, a law professor at Guangzhou's Sun Yat-sen University and an expert on the the government’s population policy, told Reuters: "'They (the authorities) do have the right (to force abortions) ... " The same report interviewed a young Chinese woman, pregnant with four-month-old twins, who last February had been dragged into a maternity ward and had her belly injected with a needle in forced abortion.

The UNFPA's participation in China's forced abortion one-child policy is well-documented. Furthermore,  when Colin Powell (a supporter of abortion) was US Secretary of State, the State Department verified the pro-life Population Research Institute’s allegations that the UNFPA was cooperating with China's coercive abortion programme:


“UNFPA's support of, and involvement in, China's population-planning activities allows the Chinese government to implement more effectively its program of coercive abortion,” (letter from Colin to Congress, 21 July 2002)


The UK government gave over 40 million US dollars to the "regular funds contributions" of UNFPA in 2007 (the latest report available), about 10% of the total income China received in regular donations from over 180 countries worldwide.

So long as the UK, the US (under the Obama administration), and European governments eagerly fund, to the tune of hundreds of millions of dollars, the brutalization of China's women and the forced abortion of their children, we should not be surprised if China airily dismisses our concerns about the execution of a drug smuggler said to have suffered from bi-polar disease.