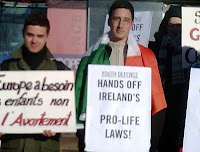 A youth vigil was held this morning outside the European Court of Human Rights in Strasbourg, France, as the court considered a challenge to Ireland's constitutional protection of unborn children.

The court is considering the A, B, & C v Ireland case, which the Irish pro-abortion lobby is using to claim that Ireland's ban on abortion violates the European Convention on Human Rights.

One of the young people taking part in the vigil, Olivier Jarry from France, said outside the court:


"Ireland is one of the only countries to have resisted abortion. The people of Ireland have voted against abortion, yet now there is a danger that the European institutions will change Ireland's constitution."


"We travelled to Strasbourg to represent the majority of Irish people who are pro-life and who don't want abortion in Ireland. This issue should be decided upon by the Irish people and not imposed undemocratically by a European court. We stand here in solidarity with the children whose lives are threatened by the possible outcome of the court's ruling."