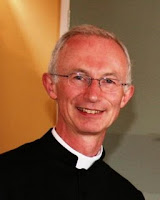 Caritas in Veritate (Latin for "charity in truth"), the wonderfully-named blog of Fr John Boyle (pictured), carries an important reflection on a worrying report in The Tablet concerning Bishop Malcolm McMahon, the chairman of the Catholic Education Sevice, an agency of the Catholic Bishops' Conference of England and Wales.


" ... the backgrounds of potential school leaders were not the concern of the Church and it should be up to applicants themselves to decide whether they were able to live according to church teaching ... "


"[Bishop McMahon] also said that the Church was not opposed to civil partnerships. 'Civil partnerships are precisely what they say they are. They’re not gay marriages or lesbian marriages. They’re simply a legal arrangement between two people so that they can pass on property and other rights in which they were discriminated against before,' he said. 'We have many gay people in education and a large number of gay people in the Church, at least the same as the national average. I think a person who is leading a church school should live according to the Church’s teaching whether they are in a civil partnership or not. A civil partnership is not a marriage, it’s not a conjugal relationship.'


Fr Boyle's commentary is well worth reading. He is a canon lawyer and contributor to the newsletter of the Canon Law Society of Great Britain and Ireland.

Bishop McMahon's worrying reported statement comes in the wake of considerable concern regarding previously published episcopal policy in England and Wales. I have blogged before about the Diversity and Equality guidelines, a publication of the Catholic bishops' conference of England and Wales. This policy document welcomes, seeks to implement, and says that it will monitor the implementation (in the Catholic Church, including in Catholic schools) of British government and EU law on the equal employment rights of male and female homosexuals, and bisexuals and transsexuals.

I note that the Catholic Bishops' Conference website currently states of these Guidelines:


"Please note that the law in this area has already changed in certain respects since the Guidelines were published and it is likely to change further in the light of new equality legislation due before parliament in 2009. New comprehensive Guidelines will need to be written and published after the Bill has been enacted."


I do hope and pray that the bishops will reverse their policy in any newly-written guidelines and that they will repudiate Bishop McMahon's reported statement. Their guidelines and the bishop's statement have the effect of undermining the culture of life. As I said in my earlier post:


"With the bishops of England and Wales now welcoming and guaranteeing the presence of homosexual, bisexual and transsexual teachers in Catholic schools in England and Wales, and in the light of Evangelium Vitae, paragraph 97 (above), is it not completely unrealistic to expect that Catholic sexual morality, including the sacredness of human life before birth, will be taught in these schools?

"A pro-abortion document, prepared at the request of the EU Commission on the right to conscientious objection, links rights relating to sexual orientation to other supposed rights, including the “right” to abortion and the “right” to euthanasia and assisted suicide. The document quotes, in part, the Diversity and Equality Guidelines of the Catholic bishops of England and Wales in a generally approving way. The bishops’ guidelines and the EU experts’ document clearly agree that, subject to limited and narrow exceptions, Catholic organisations must ensure that no job applicant or employee receives less favourable treatment than another on the grounds of sexual orientation."