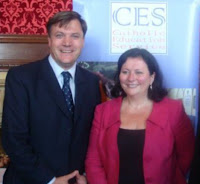 In many parts of England and Wales this weekend there will be a special collection for the Catholic Education Service (CESEW). (Pictured right are Ms Oonagh Stannard, the chief executive and director of the CESEW with Mr Ed Balls MP, Secretary of State for Children, Schools and Families.) My wife and I will not be giving a donation - and this is why:

(2) CESEW is giving general support to the British government’s legislative proposals to require all state schools to teach sex and relationships education throughout the school years (from ages five to 18). (N.B. The state schooling system in England and Wales includes the majority of Catholic schools.) The British government has stated clearly that its proposals have been drafted to entrench a form of sex education which promotes access to abortion and contraception in all state schools, including in Catholic schools.

*Connexions, “Young people and sexual health – A Reader for those participating in the Connexions’ training programme”, Crown Copyright 2003.