SPUC reports from the March for Life in Paris

Anthony Ozimic, SPUC's communications manager, and his fiancée Magdalena, have just returned from representing SPUC at the March for Life in Paris last Sunday, and Anthony has sent me the report below. 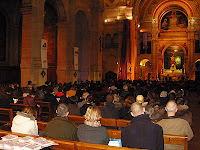 "Sunday's march was preceded on Saturday evening with a prayer vigil (right) for Catholics at L'Église St Francois-Xavier, a particularly beautiful church. Between seven and eight hundred people, mostly in their twenties, attended. We were impressed by the sermon given by Monsigneur Chauvet, the parish priest. He explained very clearly the Catholic Church's teaching on the dignity of the human person, the important place of conscience and the respect due to the human body. The young people were therefore well-versed in the reasons for participating in the next day's march. 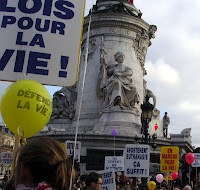 "Sunday's march started at the Place de la République (left). The Place soon overflowed with thousands of young people bearing placards, t-shirts and balloons with clear, strong messages. One placard which caught my eye read: "No children, no pensions!" Representatives of pro-life groups from various countries were invited to speak. Magdalena, a talented linguist, translated my speech to the marchers. We explained to them SPUC's history, its international outreach and the importance of solidarity within the European pro-life movement. I was also interviewed by Agence France Presse (AFP) and other reporters.

"The march then started on its route (right, with Magdalena in the foreground). As the march is organised and led by young adults, the spirit is very boisterous, with catchy songs, witty chants and plenty of bonhomie. I was amazed to see one group called "Musicians for Life", another group called "Socialists for Life" and a third group of hunting-horn players! Walking behind the main march was a Catholic prayer procession, featuring parents and their children and led by superiors and representatives of several religious orders. "The march ended three hours later outside the Paris Opéra, one of the city's finest landmarks (left, with me in the foreground). The organisers estimate there were 20,000 marchers. Although 25 French bishops sent messages of support, it's a pity that only one attended. Nonetheless, such a event is an impressive achievement considering the strong anti-life trend in France. The youthful vigour on display makes one hopeful for the future."