It's not possible to practise IVF and respect human life 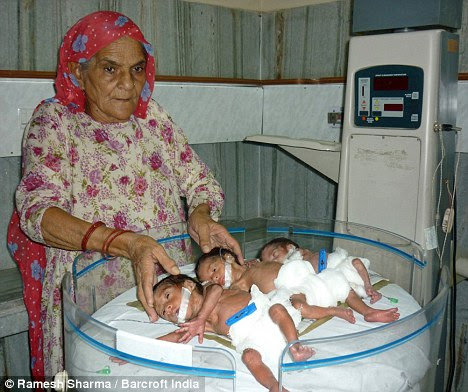 This is the latest in a stream of negative reports about IVF. Earlier in the year the Telegraph reported on a study that suggested IVF may lead to infertility problems.

On Monday, Bhateri Devi (pictured above), a 66 year old woman, become the oldest woman in the world to give birth to triplets. On the same day a 72 year old woman, who gave birth thanks to IVF treatment at 70, revealed she is dying and criticised her IVF centre for not explaining the risks to women about having babies later in life.

In the UK this week Amanda Ross, a TV producer, said that she would not recommend IVF to anyone after numerous failed procedures left her stomach purple from injections.

This all comes after last week the Human Fertilisation and Embryology Authority statistics showed that many women choose to have abortions after having conceived through IVF.

In response to this Wesley Smith has suggested that IVF has led to the objectification of unborn human life.


Amidst all the challenges faced by the pro-life movement, we must continue to work openly and courageously for a ban on all IVF procedures. Opposing in-vitro fertilisation (IVF) does not imply denying babies, conceived by IVF, their humanity. However, it's vital to oppose IVF as a way of conceiving children since it turns human beings into commodities to be brought to birth or discarded at will.

IVF amounts to the manufacture of human beings. The practice of IVF assumes that our offspring may be produced in the laboratory, and that the role of the natural mother, in safeguarding with her own body the welfare of the embryo from conception, may legitimately be transferred to other people. IVF thus makes embryos vulnerable, exposing them to the risks of being discarded, frozen or experimented upon. Countless human embryos have perished in the development and practice of IVF. Since the birth to the first IVF child over thirty years ago – well over two million embryos have been discarded, or frozen, or selectively aborted, or miscarried or used in destructive experiments. (2,137,924 human embryos were created by specialists while assisting couples in the UK to have babies between 1991 and 2005, according to BioNews. During this period, the HFEA informs us that the total of live babies born through IVF procedures was 109,469.)

In this connection, the Southern Cross Bioethics Institute has prepared a paper for SPUC regarding the “Creation and Transfer of Single Embryo in Reproductive Technology” which can be found here.

Catholic teaching on the matter, of course, is crystal clear: that it's not possible to practise IVF and to protect human life. The instruction Dignitas Personae, from the Sacred Congregation for the Doctrine of the Faith (SCDF) at number 14, explains:


"The fact that the process of in vitro fertilization very frequently involves the deliberate destruction of embryos was already noted in the Instruction Donum vitae.[26] There were some who maintained that this was due to techniques which were still somewhat imperfect. Subsequent experience has shown, however, that all techniques of in vitro fertilization proceed as if the human embryo were simply a mass of cells to be used, selected and discarded.

"It is true that approximately a third of women who have recourse to artificial procreation succeed in having a baby. It should be recognized, however, that given the proportion between the total number of embryos produced and those eventually born, the number of embryos sacrificed is extremely high.[27] These losses are accepted by the practitioners of in vitro fertilization as the price to be paid for positive results. In reality, it is deeply disturbing that research in this area aims principally at obtaining better results in terms of the percentage of babies born to women who begin the process, but does not manifest a concrete interest in the right to life of each individual embryo."

And the SCDF instruction Donum Vitae, on respect for human life in its origin and on the dignity of procreation says:


"The one conceived must be the fruit of his parents' love. He cannot be desired or conceived as the product of an intervention of medical or biological techniques; that would be equivalent to reducing him to an object of scientific technology. No one may subject the coming of a child into the world to conditions of technical efficiency which are to be evaluated according to standards of control and dominion. The moral relevance of the link between the meanings of the conjugal act and between the goods of marriage, as well as the unity of the human being and the dignity of his origin, demand that the procreation of a human person be brought about as the fruit of the conjugal act specific to the love between spouses. The link between procreation and the conjugal act is thus shown to be of great importance on the anthropological and moral planes, and it throws light on the positions of the Magisterium with regard to homologous artificial fertilization." (DV, II, B, 4c)