Campaign Life Coalition is led by a man of vision My snapshot (right) expresses for me what real pro-life leadership is all about. It's Jim Hughes, national president of Campaign Life Coalition and my fellow vice-president of International Right to Life Federation. He's bringing in extra chairs to a congress hall overflowing with delegates.

Over 30 years ago, Jim sacrificed a successful business career to establish the pro-life struggle in Canada which he's led ever since. Apart from leading one of the world's toughest pro-life political battles with great skill and legendary good humour - unborn children in Canada have no legal protection whatsover -  Jim's vision and generosity have resulted in pro-life initiatives whose positive impact is being experienced worlwide - including Lifesite news and Euthanasia Prevention Coalition. 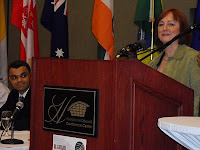 John-Henry Westen, co-founder and first editor of Lifesite news, is pictured here on the conference platform in Ottawa with Deborah Gyapong, a TV, radio and print journalist for over 20 years. John-Henry has become one of the world’s leading pro-life witnesses. Earlier this month at the World Prayer Congress for Life in Rome he spoke powerfully about his conversion experience to life and to family values, inspired by the example of his father (who, John-Henry tells me, was, in his turn, inspired by the leadership of Jim Hughes). John-Henry’s Lifesite news articles now appear in hundreds of publications worldwide. He and Dianne, his wife, have seven children.
Deborah Gyapong belongs to the traditional Anglican communion and she now reports on religion and politics principally for Roman Catholic and evangelical newspapers. In 2005, the manuscript for her suspense novel The Defilers won the Best New Canadian Christian Fiction Award. The prize included publication. The Defilers was released in May 2006. 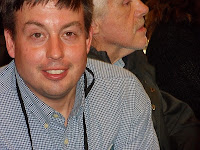 Alex Schadenberg, the executive director of Euthanasia Prevention Coalition, and Susan, his wife, have six children. Alex has just returned from a speaking tour of Australia - and he's pictured (right) at the Ottawa conference where, with Peter Ryan, a moral theologian, he addressed us on euthanasia. The goal of the Euthanasia Prevention Coalition is to help in building around the world well-informed, broad-based, groups in order to establish an effective social barrier to euthanasia and assisted suicide.


Comments on this blog? Email them to johnsmeaton@spuc.org.uk
Sign up for alerts to new blog-posts and/or for SPUC's other email services
Follow SPUC on Twitter
Join SPUC's Facebook group
Please support SPUC. Please donate, join, and/or leave a legacy
at 19:11