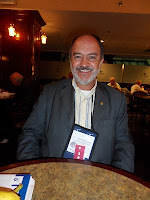 Pope Benedict could not have been more blunt about abortion, euthanasia, and the forthcoming presidential election in Brazil, according to Dr Talmir Rodriguez, a member of Brazil's federal parliament. He is chairman of the Brazil parliament's (over 200-strong) pro-life group of elected representatives.

Talmir (pictured here across the breakfast table!) and I met this morning during Canada's Campaign Life Coalition Congress in Ottawa at which we are speaking this weekend. We were discussing the Pope's address yesterday to Brazil's national conference of bishops (its north east region). The bishops were in Rome for their 5-yearly "ad limina" visit. Talmir told me:


"The Pope told the bishops that Brazilians must not vote for a clearly pro-abortion candidate to be Brazil's president, a candidate who belongs to a party, officially known to be pro-abortion, indeed a party which will not accept politicians who refuse to vote for abortion".


"First, the duty of direct action to ensure a just ordering of society falls to the lay faithful who, as free and responsible citizens, strive to contribute to the just configuration of social life, while respecting legitimate autonomy and natural moral law.

"Your duty as bishops, together with your clergy, is indirect because you must contribute to the purification of reason, and to the moral awakening of the forces necessary to build a just and fraternal society. Nonetheless, when required by the fundamental rights of the person or the salvation of souls, pastors have the binding duty to emit moral judgments, even on political themes.

"When forming these judgements, pastors must bear in mind the absolute value of those ... precepts which make it morally unacceptable to chose a particular action which is intrinsically evil and incompatible with human dignity. This decision cannot be justified by the merit of some specific goal, intention, consequence or circumstance, thus it would be completely false and illusory to defend, political, economic or social rights which do not comprehend a vigorous defence of the right to life from conception to natural end. When it comes to defending the weakest, who is more defenceless than an unborn child or a patient in a vegetative or comatose state?

"When political projects openly or covertly contemplate the depenalisation of abortion or euthanasia, the democratic ideal (which is truly democratic when it recognises and protects the dignity of all human beings) is betrayed at its very foundations. For this reason, dear brothers in the episcopate, when defending life we must not fear hostility or unpopularity, rejecting all compromise and ambiguity which would conform us to the mentality of this world."

In order to understand the significance of Pope Benedict's comments, we should bear in mind recently reported developments in the Brazilian presidential election campaign:

Dilma Rousseff, the Brazil Workers' party presidential candidate, had described herself as personally opposed to abortion. This prompted Archbishop Aldo Pagotto of Paraiba to accuse Brazil’s Workers' Party of 'misinformation and manipulation of consciences'.


"In a video released Oct. 11, the archbishop said the party’s actions on behalf of its candidate ... are aimed at 'deceiving voters' into believing that she does not favour any legalization of abortion in the country. However, in an internet video produced in 2007, she is shown arguing that, 'Today in Brazil, it is absurd that abortion has not yet been legalized’.

"The archbishop charged that since the 1990s the Workers' Party has been in league with international organizations that have financed the expansion of contraception and abortion in Brazil.

“'Ever since it rose to power, the Workers' Party agenda has been the complete legalization of abortion in Brazil', he said."

Whatever the outcome of the presidential election - and I'm told it's not looking good - these are exactly the kind of interventions the world needs from religious leaders. The last four decades have seen the greatest slaughter of human beings in the history of the world by abortion, abortifacient birth control, human embryo experimentation and, increasingly by euthanasia. Countless millions of human beings are being killed each year in defiance of international agreements which uphold the right to life for all members of the human family. The Pope's remarks to the Brazilian bishops have universal application:


" ...it would be completely false and illusory to defend, political, economic or social rights which do not comprehend a vigorous defence of the right to life from conception to natural end."

Pope Benedict rightly recognizes the role of the lay faithful to work for the just ordering of society - but it falls to church leaders to provide "moral awakening". Let's pray that Pope Benedict has the strength, through such leadership, to turn the current strong tide of episcopal acquiescence to pro-abortion, anti-parents governments, especially in Britain.

Comments on this blog? Email them to johnsmeaton@spuc.org.uk
Sign up for alerts to new blog-posts and/or for SPUC's other email services
Follow SPUC on Twitter
Join SPUC's Facebook group
Please support SPUC. Please donate, join, and/or leave a legacy
at 23:26