The greatest achievement of the pro-life movement is that it exists! 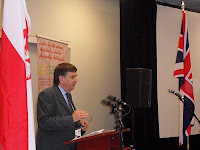 In Ottawa, I welcomed delegates on behalf of International Right to Life Federation (IRLF) which was co-sponsoring (in a purely honorary way) Campaign Life Coalition's Congress. I was standing in for our IRLF president Dr Jack Willke (who arrived after the opening ceremony). I said:


The fact that the pro-life movement exists is far more important than any successes we may have enjoyed at the national or international level. Such successes are important – whether they are legislative successes, successes in the courts, or successes enjoyed by a pro-life counselling group or by pro-lifers giving witness outside an abortion clinic.

All such successes, of course, may result in human lives being saved and so their value is immeasurable.

During the past month - in pro-life conferences in Rome, Glasgow and Ottawa - I have certainly seen living evidence of "expertise in pro-life work" passing on to the next generation - with older statesmen and stateswomen of the pro-life movement sharing the platform with young, and some very young people, who are poised to become significant leaders in their own right.

One of the speaking stars in Ottawa has been Lia Mills, who's 14 (pictured right). As part of a school assignment for the 7th-grade, she chose to write a speech on abortion. In spite of being strongly encouraged not to pursue the topic, and threatened with disqualification on a number of occasions, she pressed on. The YouTube video of her speech has been viewed almost 1,000,000 times by people from around the world. Since then, Lia has worked on several other YouTube videos with the goal of helping educate people on the issue of abortion. She is the spokesperson for Teen Defenders, an organization whose goal is to help connect with youth on the abortion issue. 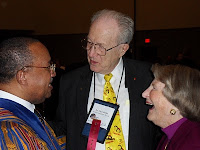 How fantastic it is that Lia Mills has been able to share the platform here in Ottawa with Dr Jack and Barbara Willke whose Handbook on Abortion was first published in 1971 and is now in its 7th edition. Jack and Barbara are 62 years married, they have 6 children, 22 grandchildren and one great grandchild. Other significant publications include: Abortion and Slavery, History Repeats and Assisted Suicide & Euthanasia, Past & Present and they have co-authored six other books on human sexuality which have been translated into 30 languages. Jack and Barbara are currently working on a history of the pro-life movement in which they have been actively involved as leaders at the federal and state level from the beginning. They have lectured (to date!) in 87 countries.

Jack and Barbara are pictured above at the Congress with Reverend Johnny Hunter, the president of Life Education and Research Network (LEARN), the largest African-American pro-life organization in the US, who inspired delegates with a stunning speech during last night's banquet. Under Reverend Hunter's leadership, the African-American community in the US has become aware of the devastating effects of abortion on their racial group - and he refers to himself as the pastor to the unborn.


Comments on this blog? Email them to johnsmeaton@spuc.org.uk
Sign up for alerts to new blog-posts and/or for SPUC's other email services
Follow SPUC on Twitter
Join SPUC's Facebook group
Please support SPUC. Please donate, join, and/or leave a legacy
at 23:12