Ireland, historic bastion of civilised values, is targeted by the culture of death 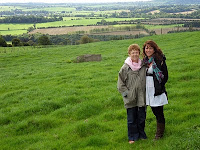 Josephine, my wife, and I, went last month with two of our children, to join 10 of Josephine's 14 brothers and sisters for a family reunion in County Meath, Ireland.

Josephine's family were commemorating the 50th anniversary of their leaving Ireland for England in pursuit of work.

Josephine and Teresa, our daughter, are pictured (above) standing on the Hill of Slane where St Patrick lit the Paschal Fire on Easter Eve in 433 AD - in defiance of the Royal edict of the High King of Tara. The Easter Fire is lighted each year on the hill. Josephine recalls how, as a little girl, she and her family would walk from Wilkinstown to Slane - several miles - for the ceremony. 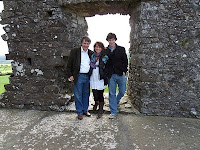 The Hill of Slane remained a centre of religion and learning for many centuries after St. Patrick. The ruins of a church and college can be seen on the top of the hill. I'm pictured right with Teresa and Paul, our son, exploring in ruins of the college.

Whenever I'm in Ireland I never cease to be deeply moved by the archaeological evidence and, more important, the living human evidence of a people who upheld Christian values for hundreds of years and who have played a critical role in preserving those values as the true basis of western civilisation.

During our trip to Ireland Josephine and I travelled to Galway and we went exploring that beautiful county.

We visited the Church of the Immaculate Conception to pray before the Blessed Sacrament which was exposed in a side-chapel. I found in the church a number of newsletters promoting the Clann Resource Centre. (The parish newsletter made reference to activities being run by the Centre.)

That evening I looked up Club4U on the internet and found a number of "Help on the Web" links on their Think Positive page. One click on spunout on that page took me to another page where I clicked on sexual health where, lo and behold, Irish youngsters - maybe youngsters whose families go to Mass at the Church of the Immaculate Conception - can be introduced to the Irish Family Planning Association (IFPA) which is affiliated to the International Planned Parenthood Federation, the largest abortion-promoting agency in the world. The IFPA is the organization which earlier this month held a conference in Northern Ireland entitled the 'First All-Ireland Conference on Abortion and Clinical Practice'. The Catholic bishops of Northern Ireland has issued a statement "deploring" and "opposing" the conference, saying:


"This conference is clearly designed to undermine the rights and welfare of children in the womb and the consistently pro-life position of the majority of people on this island. It is an attempt to normalise what is unacceptable. We appeal to all those who cherish the inherent dignity of human life in all its stages to join us in expressing opposition to this event.

"Every human life is worthy of protection from the moment of conception to natural death. The dignity of the human person is absolute and inviolable. We call on public representatives to express their opposition to this conference and to promote and defend a legislative environment which respects the inherent dignity of life in all it stages.

"A conference which promotes themes such as 'manual vacuum aspiration' and 'issues in late abortion' is an affront to the dignity of the human person. It is gravely immoral. Respect should be shown in all circumstances for the life and well being of both the mother and the unborn child.

"One of the objectives of the conference is to learn about how clinicians can be trained to provide abortion services. This raises questions about how the statutory authorities should respond to such an event in a jurisdiction where abortion is illegal in most circumstances.

"No one should be forced to act against their conscience on a moral issue as fundamental as the right to life of the unborn. Employers and others must therefore uphold the right of every person to have their moral conscience and deeply held religious beliefs respected."

It breaks my heart that Ireland, whose history and whose people have repeatedly demonstrated their outstanding defence of Christian values and the sanctity of human life, should be targeted by the culture of death so aggressively. The promoters of the culture of death do not even stop at the door of the church as I found in Oughterard, County Galway, last month, in that most sacred place for the Catholic community - a Catholic church where the Blessed Sacrament is being exposed.

I hope and pray that material promoting Club4U in Oughterard will be withdrawn and a new club, one without links to the pro-abortion industry, is established in the area and elsewhere in Ireland.


Comments on this blog? Email them to johnsmeaton@spuc.org.uk
Sign up for alerts to new blog-posts and/or for SPUC's other email services
Follow SPUC on Twitter
Join SPUC's Facebook group
Please support SPUC. Please donate, join, and/or leave a legacy
at 09:59