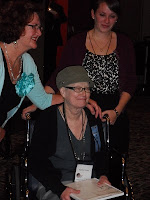 Apart from taking on leadership roles in politics and in the pro-life movement, she became a school board trustee and was famous for her opposition to sex education, abortion and the promotion of homosexuality in schools. In 1997 Heather was involved in a legal battle that went all the way to the Supreme Court of Canada regarding the decision to allow in Catholic elementary schools three children's books which portrayed same-sex parents.

Two years ago the Heather was diagnosed with breast cancer. She underwent chemotherapy and various treatments but recently decided that the cancer had become too aggressive and she decided to stop all treatment. It was her wish that she would be able to attend the 2010 international congress in Ottawa, involving a 7 hour trip from her home in British Columbia. Receiving the award, Heather told us that she would fight abortion till she day she dies. I have rarely been so moved.


Comments on this blog? Email them to johnsmeaton@spuc.org.uk
Sign up for alerts to new blog-posts and/or for SPUC's other email services
Follow SPUC on Twitter
Join SPUC's Facebook group
Please support SPUC. Please donate, join, and/or leave a legacy
at 21:40