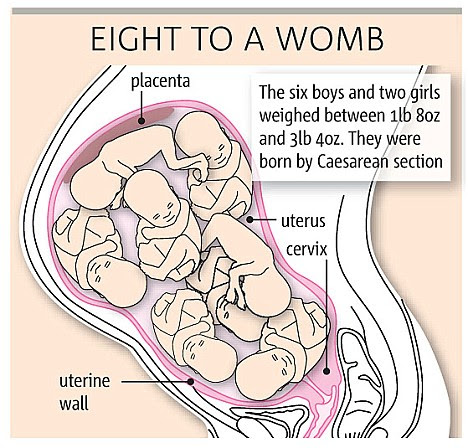 All children are equally entitled to be welcomed and loved whatever the circumstances in which they came into this world. This truth, however, does not absolve us of the obligation to reflect on the rights and wrongs relating to the circumstances in which new people are conceived. I was therefore pleased to receive this response on the recent report about octuplets who have been born in California. It was sent by Southern Cross Bioethics Institute, professional advisers on bioethics to SPUC.

The recent report that octuplets had been born in California is replete with uncertainties. The initial report simply stated that infertility treatment was used, possibly meaning that drugs were taken which increase the number of eggs released. However, a subsequent report in which the grandmother of the octuplets was interviewed, raised the possibility that the children resulted from the transfer of embryos left over from previous infertility treatment. In the same report, it has also become apparent that the existing six children of the woman were also conceived using IVF. The woman is single and it is unclear how the expensive treatments were funded. The family circumstances, in which the mother lives with her parents and her six existing children, appear very modest.

Presuming the reports to be accurate, there are a number of significant ethical issues that arise.

First, the intentional conception of children who will not have a father is unethical regardless of whether infertility treatment is used. There is a considerable consensus among experts that the best developmental circumstances for children exist when they are raised with their natural mother and father. Circumstances may arise following conception in which that is not possible, in which case options exists which are directed to protecting children and providing the best alternate circumstances. But to set out with the intention to deny children a father or mother shows disregard for their well-being.

Second, IVF clinics act irresponsibly by participating in such conceptions. The report that a sperm donor was used raises all of the ethical problems associated with sperm donors, in particular whether the children will ever get to know who their biological father is.

Third, if fertility drugs were used to increase the chance of multiple pregnancies when the health risks to children and mother are so well known and documented, the medical professionals involved have acted unethically by contributing to the initiation of such a high risk pregnancy. If multiple embryos were transferred, the clinics involved have also acted unethically, but with even greater irresponsibility given the apparent direct intention to cause a high risk pregnancy. A high order multiple pregnancy like this present serious risks to the life and health of the mother and the children in both the short term and long term.

Fourth, depending upon which IVF processes were used, numerous embryos may have been discarded as part of the ‘normal’ course of infertility treatment. This is one of the present realities of IVF treatment, regardless of the number of embryos transferred to the woman. Calls for infertility treatment to involve the transfer of just one embryo do minimize the chances of multiple pregnancies; however, even the transfer of a single embryo involves a range of ethical problems (see single embryo transfer document).

Fifth, both reports carry with them the implication that it would have been appropriate to abort some of the children once the high number was known. Such ‘selective reduction’ is a particularly horrible process that, if followed, would have meant the surviving children would eventually become aware of their chance survival whilst there brothers and sisters died at the abortionists hand. What psychological damage that would produce is unknown but potentially profound. It is to the mother of the octuplets credit that she refused to have any of the children’s lives terminated.

In conclusion, whilst the natural healthy birth of octuplets understandably raises awe and respect for medical staff who use their skill and expertise to ensure a safe arrival, the use of such skill in IVF treatment which deliberately places children and mother at such high risk cannot be met with the same admiration. Neither can admiration be held for medical professionals who so readily discard embryos as a normal part of infertility treatment. Even less can any admiration be held for some of the same medical personnel who would be ready to ‘selectively reduce’ - that is terminate - the lives of some of those children, whilst they grow alongside their siblings.
at 14:19