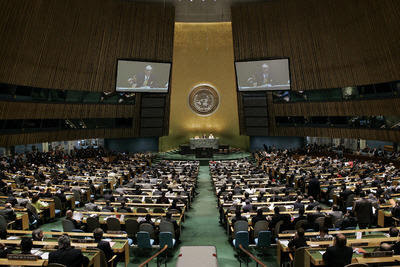 Yesterday in Geneva, the Human Rights Council "reviewed the fulfilment of human rights obligations by Malaysia". Pat Buckley, representing the Society for the Protection of Unborn Children, was present at the meeting for the presentation of Malaysia's national report which highlighted "strides made in the area of maternal health".

This is significant in view of Malaysia's comparatively strict abortion policies and the pro-abortion lobby's claim that Barack Obama's executive order to allow funding for abortion overseas is necessary in order to combat maternal mortality.

Malaysia's experience is reflected in other parts of the world with comparatively restrictive abortion legislation such as Northern Ireland where the maternal mortality rate is the lowest in the UK; and the Republic of Ireland, with its constitutional ban on abortion, which has the lowest maternal mortality rate in the world, according to figures published by the World Health Organization in 2007.

Pat reports on the Holy See's intervention which praised Malaysia's achievement in these words:

"While maintaining its restrictive abortion policies, Malaysia has made great strides in achieving the [Millennium Development Goal] on maternal health. The level of maternal mortality has diminished close to that of the most developed countries, according to the UNDP [United Nations Development Programme]. A near hundred percent of births is now assisted by skilled birth attendants. Malaysia has to be commended for this achievement."

"Despite huge improvements in health, survival, and fertility around the world in recent decades, global maternal mortality has not declined significantly. Two exceptions are Sri Lanka and Malaysia. In Sri Lanka the maternal mortality ratio—the number of maternal deaths per 100,000 live births—dropped from 2,136 in 1930 to 24 in 1996. In Malaysia it dropped from 1,085 in 1933 to just 19 in 1997.

"What can account for this impressive decline? Improving access for rural and disadvantaged communities was an important part of the strategy in both countries. Sri Lanka and Malaysia made competent, professional midwives and supervisory nurse-midwives widely available in rural areas. Midwives assisted deliveries in homes and small rural hospitals and performed initial treatment in the event of complications. They were given a steady supply of appropriate drugs and equipment and supported by improved communication, transportation, and backup services. Besides reducing financial and geographic barriers, they also helped overcome cultural obstacles and allegiances to traditional practices. Because midwives were available locally and were well respected, they developed links with communities and partnerships with traditional birth attendants.

"Malaysia and Sri Lanka pursued other complementary strategies. Transportation (in Malaysia) and transportation subsidies (in Sri Lanka) were provided for emergency visits to the hospital. In Malaysia, health programs were part of integrated rural development efforts that included investment in clinics, rural roads, and rural schools. Similarly, in Sri Lanka, the government invested in free primary and secondary education, free health care, and food subsidies for all districts. The concept was that basic health care acts in synergy with education and other types of infrastructure. For example, better roads make it easier to get to rural health facilities and facilitate transportation of obstetric emergencies. By addressing the multidimensionality of equity, these countries made significant health gains. Dramatic improvements in maternal mortality are thus possible.

"Just as important, the experiences of Malaysia and Sri Lanka show that these can be attained with only modest expenditures. Since the 1950s, public expenditures on health services have hovered between 1.4 and 1.8 percent of GDP in Malaysia and averaged 1.8 percent in Sri Lanka, with spending on maternal and child health (MCH) services amounting to less than 0.4 percent of GDP in both countries. Countries with similar income levels have significantly higher health expenditures and similar, if not higher, maternal mortality ratios. Source: Pathmanathan and others (2003)." (Page 144)