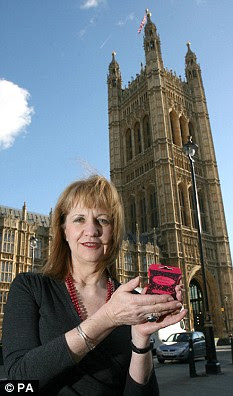 British government advice reportedly tells parents not to say to their teenage children that having sex is wrong. Ms Beverley Hughes MP, children's minister (pictured right with some condoms), says parents should advocate birth control to their sons and daughters, and the government explained she included 13-year-olds (who are under the age of consent). Such advice will be in Talking to your Teenager About Sex and Relationships, a pamphlet available from pharmacists from Thursday-week (5 March). Dr Patricia Morgan, the British-based social researcher, says young people do heed their parents when they say they disapprove of underage sex.

The government's teenage pregnancy strategy is failing yet here we have ministers telling parents to give value-free sex education and even to go with their under-age daughters to the GP's surgery to get birth control. Even worse, schools are being used to promote access to abortion without parental involvement.

SPUC is launching a petition to the prime minister on such access to abortion through schools. The preamble to the petition points out that the government is:

The main message of the petition is: "We the undersigned call upon the Prime Minister to stop schools being used to promote or facilitate abortion."

SPUC has produced a flyer about the petition and you can request a copy of the petition to sign by emailing johnsmeaton@spuc.org.uk.
at 15:07