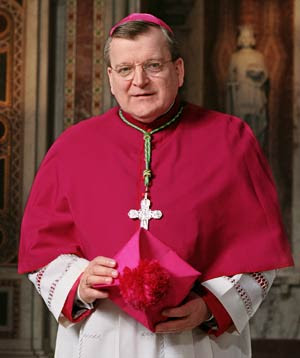 Archbishop Raymond Burke (pictured), the head of the Apostolic Signatura, the Church's top canonical court, has said regarding Catholics who support pro-abortion legislation: "There's not a question that a Catholic who publicly, and after admonition, supports pro-abortion legislation is not to receive Holy Communion and is not to be given Holy Communion" (LifeSiteNews reports).

"The Church's law is very clear. The person who persists publicly in grave sin is to be denied Holy Communion, and it [Canon Law] doesn't say that the bishop shall decide this. It's an absolute."

He says: "I don't understand the continual debate that goes on about it."

This is an interesting and important statement about church law, in my view. It reflects, after all, what an awful lot of Catholics and non-Catholics are thinking who are a considerably less qualified in canon law.

Archbishop Burke offers clear guidance as to how bishops and priests must proceed with regard to prominent Catholics who support pro-abortion legislation. The archbishop says: "There's not a question that a Catholic who publicly, and after admonition, supports pro-abortion legislation is not to receive Holy Communion and is not to be given Holy Communion" (My emphasis).

LifeSite's report continues: "When asked what the solution was, [Archbishop Burke] responded, "Individual bishops and priests simply have to do their duty. They have to confront politicians, Catholic politicians, who are sinning gravely and publicly in this regard. And that's their duty. And if they carry it out, not only can they not be reproached for that, but they should be praised for confronting this situation."

It would be good to obtain further advice from the archbishop as to what ordinary Catholics can do to assist their priests and bishops in doing "their duty" as he puts it.
at 18:20