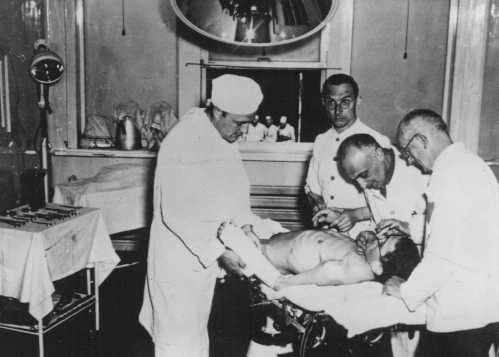 A rather disturbing eugenicist article by Matthew Syed appeared in yesterday's Times newspaper. (I have blogged before about the radically anti-life agenda which The Times has been pursuing recently.) Mr Syed said, among other things, that:
Mr Syed's motivation for his assault on the sanctity of human is clear from some of this other comments, that:
On that last point, Mr Syed has confused the adding to a whole human being of a small amount of tissue containing animal genes - an action which doesn't change the recipient's totally human genetic identity - with the creation of a new being of a genetic identity which is dubious (more or less depending on the extent of the human-animal mixing).

More generally, Mr Syed should be told that the United Nations Universal Declaration of Human Rights was created three years after the second world war because "disregard and contempt for human rights have resulted in barbarous acts which have outraged the conscience of mankind" (preamble). And which barbarous acts did the declaration's authors particularly have in mind? The ones which had only just ended, those perpetrated by Nazism. Those barbarous acts included medical experiments (pictured) aimed at enhancing human capacities, in which certain groups of human beings were treated worse than animals. In Mein Kampf, Adolf Hitler argued that it is essential for human progress that some humans be treated worse than animals:

"[F]or the formation of higher cultures the existence of lower human types was one of the most essential preconditions, since they alone were able to compensate for the lack of technical aids without which a higher development is not conceivable. It is certain that the first culture of humanity was based less on the tamed animal than on the use of lower human beings ... Only pacifistic fools can regard this as a sign of human depravity."

In debates about euthanasia and assisted suicide, it is sometimes argued that it should be allowed for suffering humans to be put down, just as it is allowed for suffering animals to be put down. (I have blogged before about the danger to humans of equating humans and animals.) It is interesting to note that:
In conclusion, if we are going to uphold human rights and avoid more repetitions of the barbarous acts of the last century, we must must everywhere condemn the transhumanism of Mr Syed and his eugenicist ilk.
at 13:17