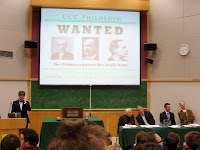 "On Monday night University College Cork (UCC) Philosophical Society held a debate on the motion "That this House supports UCC's decision to use embryonic stem cell research." The catalyst for the motion was the decision by UCC to conduct embryonic stem cell research using surplus IVF embryos. Among others, the society had invited Baroness (Mary) Warnock to speak. Prior to the debate, the projection screen (pictured) advertised a forthcoming debate about the 1916 Easter Rising, subtitled: "Wanted: for crimes against the Irish State", which I felt neatly summed what many Irish feel about the influence of British and other foreign anti-lifers in Ireland! 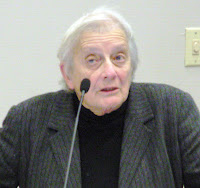 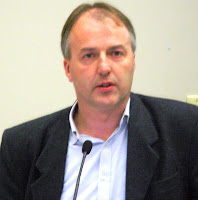 Also speaking in the favour of the motion was Dr Tom Moore (pictured), the scientist who is conducting embryonic stem cell research at UCC. Among other things, Dr Moore said: 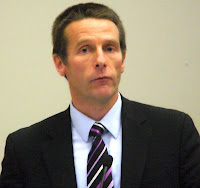 Dr Donal O Mathuna (pictured right), Professor Tommy McCarthy (pictured below), and others in the floor debate later, spoke valiantly in defence of embryonic children. They highlighted how anti-life bioethicists have manipulated public consultation in Ireland in order to bolster and promote the failed science of destructive embryo research. Sadly the motion was carried by about two to one." 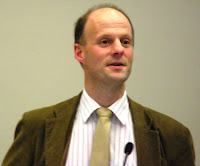