A more hopeful vision for Ireland 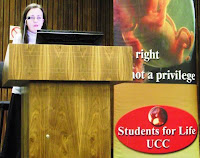 "Following Monday night's debate at University College Cork, UCC Students for Life organised a meeting, hosted by Kathy Sinnott MEP. The meeting was introduced by Jacinta Daly (pictured left), who reminded the audience that unethical embryo research is restricted not only in Ireland, but also in other countries e.g. Germany. The speakers were introduced by Mary O'Regan (pictured right), who said the issue of abortion touched her even as a seven-year-old during the 1992 Irish abortion referendum. 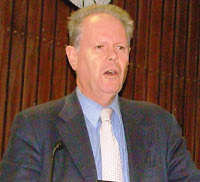 "William Reville (pictured), associate professor of biochemistry at UCC, explained in-depth the science and the ethics of stem cell research. He pointed out how arbitrary it is to conclude that humanity only starts at some point later than conception. He also said that history of medical research suggests embryonic stem cell research may never work even after many decades and trillions of dollars are spent on it. The newly-discovered ethical alternative technology of induced pluripotent stem cells is far more promising and is already being enhanced. 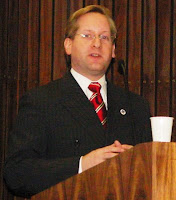 "I described (pictured) the universal calling to be pro-life as positive, inclusive and in harmony with today's concerns for a better future based on human rights. (I had also spoken to students on Sunday night in Hull, northern England, where I shared the same vision from within a Catholic theological perspective.) I also encouraged the audience to sign and/or promote the scientists' and physicians' declaration promoted by Amnesty for Babies. 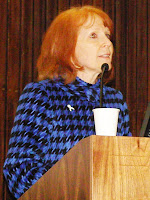 "Kathy Sinnott MEP (pictured) started by referring to her own miscarriage in earlier life, and that women naturally know their early or unimplanted embryos to be babies. She explained how destructive embryo research has little to do with embryology but a lot to do with vested commercial and academic interests, and gave advice on how pro-lifers could oppose UCC's decision to allow embryonic stem cell research.

"In conclusion, Tuesday's meeting presented a far more hopeful vision for Ireland than the one offered by Baroness Warnock during Monday night's debate."
at 14:12