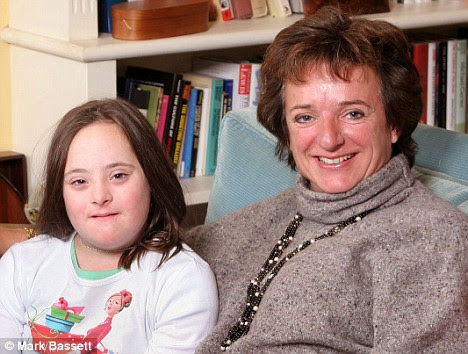 There has recently been a lot of press coverage rejoicing over the supposed fact that more babies with Down's syndrome are being born now than at any time since widespread pre-natal testing began in 1989. The claim made is that the trend towards aborting increasing number of babies with the syndrome has now been reversed. The articles in various national newspapers have suggested that this is because British society's increasing acceptance of allowing such babies to be born.
While this sounds like very good news, it has to be tempered with a very large dose of caution.

Just over two years ago, the Down's Syndrome Association pointed out that 62 per cent of all Down's syndrome cases are diagnosed while still in the womb and 92 per cent these babies are aborted.

And Rosa Monckton, who (with her husband Dominic Lawson) has a daughter Domenica, aged 13, who has Down's syndrome (both pictured above) sounded a cautionary note in her article in the Daily Mail (26th November 2008). She says: "These are the figures: in 1989 there were 717 babies born with Down's syndrome, and in 2006 there were 749. This does not seem to be to be such a huge sea change ... "

Whilst well over half of babies with Down's Syndrome are sought out before birth, and then the vast majority of those are killed, British attitudes towards the disabled, including the parents and families of the disabled, born and unborn, arguably remain as enlightened as those towards the majority population in South Africa under apartheid.
at 06:55