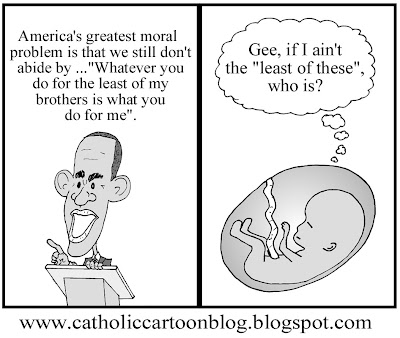 Some media outlets, even ones usually supportive of the pro-life cause, have convinced themselves that President Obama is a moderate on abortion, who wants all sides of the abortion debate to find and stand on common ground. A recent meeting between White House staff and American pro-life groups, however, provides further evidence against that myth. Family Research Council (FRC), who were represented at the meeting, report:

"In answer to a question about reducing abortion, Obama staffers Joshua DuBois and Tina Tchen made it clear--the President's goal is not to reduce the number of abortions. It is to reduce 'the need for abortion' ... For President Obama, it's not only unacceptable to protect unborn life legally, but it is becoming clear that it is unacceptable even to influence a woman to 'choose' life ... Don't be fooled by the conciliatory rhetoric about 'common ground'. Barack Obama believes women 'need' to have abortions, and judging by his actions, he intends to make sure that they get them."

As I pointed out in my initial reactions to Obama's Notre Dame speech, while he runs his rhetorical campaign to bring people together to reduce abortions, he is ruthlessly pursuing policies which are aimed at providing more abortions and will lead to more unintended pregnancies. We cannot afford the indulgence of wishful thinking that Mr Obama is really some sort of Gandhi-like reconciler. Any such thinking by pro-lifers would result in more abortions, not least through an emasculation of the pro-life movement itself.
at 13:35