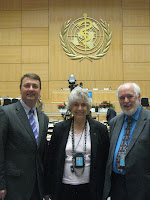 Figures released today by the World Health Organisation (WHO) show that improved standard health care, but not abortion, is needed to improve survival rates among mothers.

Pat Buckley, who is currently lobbying for SPUC at the WHO's World Health Assembly in Geneva, tells me:

"The world statistics published today underline once again the falsehood of the claim that saving women's lives is dependent on legal abortion. Tragically, this false claim diverts attention from women's real healthcare needs and threatens to undermine the whole field of obstetrics and gynaecology.

"The WHO and the United Nations Population Fund (UNFPA) have focused on reducing the number of children born, rather than on making childbirth safer. This approach is fundamentally flawed, ideologically driven and ultimately responsible for the deplorable lack of progress in improving maternal mortality in developing countries.

"We are therefore calling upon the governments represented at this week's World Health Assembly to resist any moves promoting abortion under the guise of sexual and reproductive health."