Black activist warns of the dangers of the Obama presidency 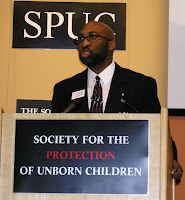 Here at the SPUC conference in Derbyshire, Rev Arnold Culbreath, Urban Outreach Director of Life Issues Institute, Inc., has been speaking about the dangers of an Obama presidency. Despite the dismal situation, he believes that the president’s heart could be changed on abortion. Arnold is not anti-Obama and prays for him daily. He says that God yearns to save abortion supporters. While we may hate the sin of abortion, we should not hate those who approve of it.

While it is significant that a black man had been elected president, Arnold is also uncomfortable about it. Mr Obama had consistently supported abortion yet this was by far the biggest cause of death among black Americans. More than half a million black babies were aborted each year. While black women were just some 13% of the population, they were involved in more than a third of all abortion.

Arnold pointed out that Hamilton County, Ohio, was nearly a quarter black black but more than half of abortions there were on black women. A quarter of black people in America had been aborted. Blacks and Hispanics were targeted by abortion providers, with a disproportionate number of abortion facilities in minority areas.

Mr Obama had immense charisma. Black people were so excited to have a black president that they did not notice the policy coming from the White House. White people also allowed their excitement to get the better of them. Too many church-going African Americans were Afro-centric rather than Christo-centric, Arnold observed.

Arnold told us that Mr Obama’s first 200 days had borne much pro-abortion fruit. There was a lot of rhetoric about building bridges but the administration had held many meetings with abortion supporters. Mrs Michelle Obama seemed to be even more pro-abortion than her husband.

However, pro-life people should not give in to despair. “If we lose heart, we lose the battle,” Arnold said. The battle would be won one person at a time, one baby at a time. The Obama presidency had actually caused more discussion of abortion among black Americans. Arnold is working behind the scenes to open a constructive dialogue with the Obama administration on life issues. He says: “You must lovingly and caringly draw people in and then drop the truth on them!”