The future of the pro-life battle in Britain and Ireland

This afternoon at the SPUC annual national conference in Derbyshire, we made a presentation about the history and the future of the pro-life battle in Britain and Ireland.

I mentioned how we were the world’s first pro-life pressure group. SPUC isn’t a minority group of mainly religious people seeking to impose their views on others; rather, we are a broad-based movement of folk who seek to ensure that the basic human right to life was respected. I cited major United Nations documents which assert that every person needs to be allowed to live his or her life - the most basic of human rights. Although national and international bodies may acknowledge the right to life, that right isn’t conferred by them. The right to life inheres in the human person. UN declarations additionally point out how children, born and unborn, need special protection.

These rights are tragically often ignored. Just under 50 million babies have been killed in the USA since 1973, seven million here since 1968. On the 70th anniversary of the outbreak of the second world war, The Daily Telegraph carried reports that terminally ill patients are in serious danger of being killed under a national scheme for end-of-life treatment.

The pro-life movement has been helping to stem this deathly tide. We successfully helped in the fight against amendments to the Coroners and Justice Bill which would have facilitated assisted suicide. We had previously fought off a catastrophic worsening of abortion law during the passage of the Human Fertilisation and Embryology Act. No international agreement contains an assertion of right to abortion.

Paul Tully (pictured right), our general secretary, described Ms Debbie Purdy’s campaign to get the director of public prosecutions to give guidance on whether her husband would be prosecuted if he took her abroad to commit suicide. The House of Lords had given a disastrous judgement and SPUC was pressing for such guidance to be strictly in line with the law against assisting suicide.

Pat Buckley (pictured below, r-h), our man in Dublin, said the ABC case could have serious effects throughout Europe. Three women were challenging Ireland’s pro-life constitution; they were being used by pro-abortion organisations. The case has leapfrogged Irish courts and gone to the European Court of Human Rights. SPUC is intervening in this case, which could be Europe’s Roe v. Wade. 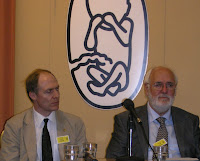 Liam Gibson (pictured left, l-h) of SPUC Northern Ireland said that we were striving there to defend a centuries-old ethical tradition which still obtained in that part of the UK. SPUC was taking the province’s health minister to court to ensure the continuation of Northern Ireland’s opt-out from British abortion law. It was attacking government guidance which sought to bring a British-style ethos to abortion provision.

Antonia Tully of Patients First Network spoke about how her group was helping patients and their families who feared euthanasia in hospitals. She had advised one patient’s friend on how to challenge medical staff about the use of the Liverpool Care Pathway. The network had helped a 44-year-old man with Down’s syndrome who was under grave threat but who survived.