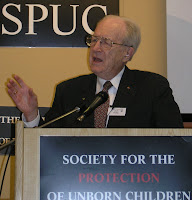 Dr Jack Willke, president of the International Right to Life Federation, said to this morning's SPUC national conference that the provision of abortion contained the seeds of its own destruction. Women who had had abortions were now mothers and might advise their daughters not to do the same as they had done. Young women were noticing that girls who had abortions were badly affected by the experience.

While Jack did not think he would live to see a change in abortion law, he thought his children would. Arguments which had been initially deployed to legalise abortion were no longer effective. When abortion supporters said that unborn children were not babies, many people were appalled and thought of images from prenatal scans.

The issue was no longer just a Catholic one, with Muslims and Evangelicals also opposing abortion. There was no relationship between how mothers felt towards their unborn children and how they treated them after birth. The number of illegal abortions had been wildly exaggerated. Tightening of Poland’s abortion law had not led to illegal abortions. Maternal mortality was a bigger problem in countries with a high abortion rate that countries with a low rate.

Jack said that the over-population argument was undermined by the way in which many countries with legal abortion had birth rates which were below replacement levels. Abortion supporters had to fall back on the argument that women simply had to have the right to choose.

Pro-life people were having more children than abortion supporters, which was changing the nature of public opinion. The number of pro-life pregnancy help centres in the US had grown immensely. Jack has found that few women wanted to speak out positively about their abortion experience. Women were increasingly prepared to say why they regretted their abortions. To the original pro-life argument that abortion kills babies could be added the argument that abortion hurts women. It also hurt men, who increasingly sought support after a partner's abortion.

Jack said how pro-life activists were fighting abortion by getting states to restrict it through regulation. He told the conference:

“We must keep doing what we’re doing. It’s slow but we shall win in the end.”

One could not lose the argument when one advanced the case that abortion killed babies.