A young woman's report on the Youth Defence Roadshow in Ireland 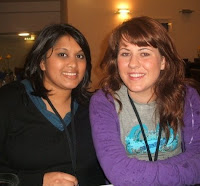 Rupal Bavishi, who attended at March's international student pro-life conference in Edinburgh, has kindly sent me her impressions of the Youth Defence Roadshow, where young peope seek to spread the prolife message in towns and cities across Ireland.

"I had the privilege of meeting some of Youth Defence’s (YD) members at the SPUC student conference in Edinburgh, Scotland, and had listened to the talk on Youth Activism given by leader Eoghan de Faoite, which had done what it said on the tin: made me think about becoming an Active Youth. The YD’ers had delivered a good sales pitch over breakfast as to why I should join them on their Roadshow, so when a Facebook invite arrived, I clicked yes and sealed my fate as an active pro-lifer.

"I arrived in Dublin on a wet Wednesday, extremely apprehensive and on my own, with the knowledge that I didn’t actually know anyone on this Roadshow, and that I could always break my leg to have an excuse to go home if it was awful.

"Luckily for my leg, I soon realised I wouldn’t want to go home.

"The Youth Defence Roadshow is organised by a group of young Irish people who are against abortion, are dedicated to keeping abortion out of Ireland and educating people on the realities of abortion. On top of being such active, passionate people, they are a fun-loving, mad-dancing group of people who like to party, have a good time, and meet new people of all backgrounds, going against the image many people seem to associate with the pro-life movement in Europe. The road show is a gathering of young people from around the world who share YD’s ethos. They embark upon a 10-day tour of Ireland in a magical mystery van, stopping in as many towns in as many counties as possible. They reminding Ireland that this cause is still being fought for, that someone is there to fight against the pro-abortion movement within both Ireland and the EU. After all this was done each day, we crazy young things would cook a massive dinner together and set out on the town to party the night away.

"Each day, we would split into two groups and each go to a town centre to set up a pro-life stall for our street session, complete with information boards, pictures, leaflets, pro-life music videos, precious feet badges, lollipops and petitions. Various YD members would spread out across different streets with petitions and leaflets, in order to catch the attention of those not walking past the main stall. On some days, YD hired a highly effective ‘digi-van’; a van with an enormous screen and speakers on the side, which played pro-life videos and messages across them during the day, such as '99 Balloons', ‘Can I live?’ by Nick Cannon, and the development of the baby in the womb.

"On one memorable day, we petitioned outside the Family Planning Clinic in Limerick, which refers women who want an abortion to England. We held 'life' boards and chanted, and were soon shouted and sworn at by the owner of the clinic who soon called the Garda. Youth Defence, however, are equipped with intelligent arguments to help their way out of such situations using Irish law and their own passion to ensure that the anti-abortion message is heard. We met the Garda many times on our travels.

"Street sessions were daunting at first, having never done anything like this before. I felt completely 'on show' and out of my comfort zone, standing next to an information board with pictures depicting the humanity of the unborn baby, and of different types of abortion, handing out leaflets to strangers in a country I had no claim on. People’s reactions were completely mixed, and in my eyes, completely unexpected. In a country like Ireland, where abortion is thankfully illegal, I did not think people would tell me I should be ashamed of myself for doing this. I soon learned that YD are defending unborn children against people who despise Ireland’s anti-abortion stance and those who uphold it - and who aren’t scared to say so. I was naïve to think that Ireland would welcome the pro-life message – but it made me want to work to ensure that one day, the nation would be as one on this vital topic.

"Education plays an important role in the YD Roadshows, and there were many such incidents as the one above, where people truly had no idea about the horrors of abortion until the truth was shown to them by YD. Without the education YD give, so many more people would fall into the pro-choice category, or even worse, the pro-apathy category where nobody cares what anybody does as long as it doesn’t affect them.

"YD’s effort paid off throughout the Roadshow as we saw the fruits of our labour. A truly fantastic experience some YD members had was a woman who came up to one of the stalls during the Roadshow with her three year old son, who she says would have been aborted were it not for Youth Defence. She wanted to meet the girl who had saved her baby the last time they met. Other stories include a baby who was saved by YD literature passed by on someone who happened across a street session and took leaflets which she eventually gave to a friend who became pregnant and was booking an abortion in England; people who came by and told us to keep fighting the good fight; little old ladies who wanted to buy us cups of tea; people giving us donations so we could continue doing this work; mothers who tied ‘Celebrate Life!’ balloons to their children’s buggies; people who stopped to watch the digi-van videos and stood for a while with their hands over their mouths in shock at the humanity of a unborn baby and most of all, people who learned the truth about abortion and walked away with a changed heart."