Hope for pro-life progress in America despite Obama control 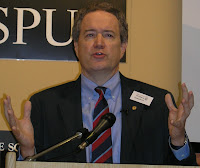 Mr William Saunders, senior counsel for Americans United for Life, told the SPUC annual national conference this morning that anti-life political forces were in national control in the United States. President Obama had done more or less everything he could have done to advance the anti-life agenda. It was deeply disappointing that the University of Notre Dame, Indiana, had given Mr Obama an honorary degree.

The president’s proposed health care reforms would advance the culture of death. The Hyde amendment, a measure which prevents state funding for abortion, could well be undermined and abortion provision could be made mandatory. There was ambiguity in draft legislation over counselling on suicide and euthanasia. The provision for conscientious objection was extremely limited in the case of one bill in the congress. Some pro-life Democrats would oppose the proposals if they promoted abortion.

Bill’s organisation had led opposition to Mr Obama’s appointment of Ms Sonia Sotomayor to the supreme court. She had said that she was not a judicial activist and Bill hopes she will not make matters worse.

Bill Saunders pointed out that many states also had their own local battles over life issues. Some states had placed restrictions on abortion and these measures had reduced the rate. The federal House of Representatives was due for an election next year and pro-life candidates could pick up seats.