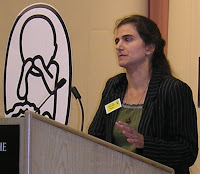 I am at SPUC’s annual national conference at the Hayes Conference Centre in Derbyshire. Our speakers are from all around the world.

Fiorella Nash, the Catholic writer, this evening called for a new pro-life feminism. She told the conference that the early feminists had opposed abortion. Many modern-day feminists, however, were not pro-life. Conspiracy theories were circulated about the Catholic church’s opposition to abortion, suggesting that the church taught that sexuality was unclean. Modern feminism sometimes ignored or dismissed evidence of the humanity of unborn children.

“The early feminists campaigned for women to have equality. I don’t think any of them envisaged women believing that they had the right to be executioners.”

The women’s movement considered women who opposed abortion as heretics

“to be marginalised, attacked and silenced by the very people who claim to speak and campaign in their name.” 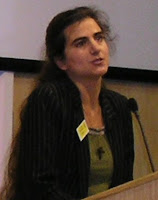 Fiorella spoke about China’s one-child policy which involved forced abortion. She had found that many women in the western world did not think that such a policy was any of their business and that population control was necessary. She asked:

“What happened to the universal sisterhood?”

Women in China were suffering because they wanted to have children.

In many countries, including China, sex-selective abortion meant that there was a gender imbalance and a shortage of women. This had led to sexual violence and other exploitation of women.

Fiorella told the conference that some feminist voices had been raised against human cloning because it needed a supply of literally millions of eggs from women.

The availability of IVF could put women under pressure, Fiorella said. She cited the case of Palestinian women who became crippled with debt because they wanted to avoid the stigma of infertility. Women were also the principal targets for assisted suicide.

“It is necessary to build on the work of existing pro-life women’s groups to develop a new women’s movement which embraces and celebrates the dignity of women, the sanctity of life and the need for men and women to work together with complementary gifts yet as equals in pursuit of the common good.” 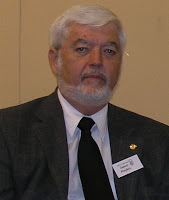 Mr Jim Hughes (pictured), president of the Campaign Life Coalition (Canada) and vice-president of the International Right to Life Federation, welcomed delegates to the conference. He said that it was important that the pro-life movement remained focused and needed to be compassionate. Pro-life people could sometimes go around with a cloud over their head, but this was mistaken. The pro-life movement was on a long journey but the length of the journey was part of the gift which the movement was making to vulnerable people.