Disabled babies are killed because of a "lack of imagination" 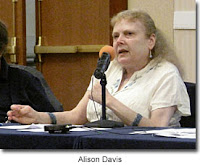 Alison Davis, leader of No Less Human a group within SPUC, has responded to an appalling story that parents in Florida have successfully sued medics for failing to inform them that their child was disabled, on the grounds that had they known they would have aborted their child.

Bryan Santana, the child of Ana Majia and Rodolfo Santana, was born with no arms and only one leg. He is now three years old.


It has been reported that a Florida (USA) couple have been awarded $4.5 m to buy equipment for their son Bryan, who was born with no arms and only one leg. The "damages" suit was brought by Ana Majia and Rodolfo Santana under the Florida State "wrongful birth statute" under which parents can sue an obstetrician or hospital for "negligence" in not noticing, and/or not informing them of their child's disability. Mr & Mrs Santana claim that had they known that their son would be disabled, they would have aborted him. In other words, the fact that they were not warned in an ultrasound that their son had disabilities denied them the chance to kill him before birth.

Florida is one of 25 US states which have a "wrongful birth statutes" like this, suggesting that disabled children not only have no right to life, but actually have the contrary right - the right not to be born.

The $4.5m which Mr & Mrs Santana have been awarded is only half the $9m "an expert" claimed was necessary to aasure Bryan's future throughout his 70 year estimated lifespan. It should be noted here that some thirty years ago, when I first became involved in the pro-life movement, doctors and hospitals worldwide were claiming that abortion for disabled was necessary because the child would not live very long. It would seem that now it is being claimed that killing disabled unborn children is "necessary" because they will live a long time. Would it not be more honest to simply say "disabled people are unwanted and should be killed at any age"? Of course, this is what the infamous Australian eugenicist philosopher Peter Singer, who now teaches philosophy and ethics (sic.) and the supposedly "prestigious" Princeton Unversity USA has been saying for as long as I can remember.

This case takes me back to the very early days of my pro-life work. One of the first cases I read about, which was pivotal in my change of mind from being pro-abortion to being pro-life, was that of a baby named Louise. She was born in 1979 in High Wycombe Hospital and was immediately found to have both spina bifida and hydrocephalus. Her paediatrician, Dr. Donald Garrow, persuaded her parents that she would be "better off dead" as she would be unable to walk, and would thus compare herself unfavourably with her two able-bodied sisters. He then sedated her so she was too sleepy to cry for food, and she eventually died of starvation and dehydration. Dr. Garrow made a video of her last days which was shown on daytime TV, and which I saw. Louise's face was grey, her eyes sunken. She had stick thin arms and legs but a bloated stomach, and looked much like the victims of starvation due to famine which elicit our sympathy, and often our financial help, whenever they are seen on TV.

I wrote to Dr.Garrow at the hospital and explained that I was disabled to just the extent that Louise had been, and that I felt he had made a horribly wrong decision. In response he invited me to speak to his "team" at the hospital, which I accepted. I cannot remember exactly what I said, but I pointed out that life with spina bifida and hydrocephalus could be full and happy, and that it was in any case wrong to deliberately kill any child on grounds of his/her disability.

Dr Garrow then took me on a tour of his ill-named "Special Care Baby Unit." One cot had been pushed apart from the others and as he removed the baby girl's blanket, I saw that she had no arms or legs. Dr. Garrow pointed this out (as if it were not obvious) and told me that the baby's mother was 14 years old and the father 13 years old. He asked if I thought that this baby too would a good future. It should be noted here that both this baby's young parents wanted her to live, so he was arguing against their wishes.

I remember replying something along the lines that I could not foresee the future, but that I knew a young man named Eddie from a swimming club for disabled people I attended before I left home to go to university. Eddie also had no arms or legs, in his case due to his mother having taken the drug thalidomide during pregnancy. Eddie loved being in the water, with a rubber ring around him, and his wit and sense of fun made him a very popular member of the club. He attended a mainstream school, which was adapted not just for him but for any student who used a wheelchair and needed an accessible environment. I lost touch with Eddie when I went away to university, but only a few years ago I read in a local newspaper about another member of the same club, Ronnie, who was born with no arms, again because his mother had taken thalidomide. He had just started his own business as a mobile DJ, driving to each "gig" in his car, adapted to be driven just by his feet, and also working the equipment with his feet.

In the last few years I met a most charming young man in a remote Indian village who has no arms and only one useable leg. He has none of the advantages that Eddie or Ronnie had, and none of the huge amount of money that has now been made available to pay for Bryan's care. However, was also going to school with his peers and was accepted by them, his teacher, his family and his community.

It is lack of imagination, not pity, which causes doctors to dismiss the lives of disabled babies as "not worth living". I hesitate to comment on the reasons why parents feel they "deserve" huge sums of money, when what they need most is love and compassion from their families and communities and a realisation that their disabled children, like every other child, has the right to life. It is their loss to think that money can buy what only unconditional love can give - acceptance and the will to find solutions to problems that need not cost millions of dollars - or even hundreds of dollars.

To return to my meeting with Dr. Donald Garrow, who in a sense was the catalyst to my changing my mind on abortion, I asked him a question as I left his hospital on the day I met the limbless baby. I asked whether he would have treated me by ending my life in the same way as he had Louise. His reply was among the most chilling things I have ever heard. He said "No, because you have a pretty face."

Dr. Garrow died on 24th February 2001. Having also later changed my mind on religion and moved from being an atheist to being a Catholic, I pray daily for his soul and the souls of all doctors who think death is the answer to life's challenges.

This lawsuit and the laws which allow such a case to be successful are deeply offensive. The message is being sent to disabled people everywhere that they are not wanted.

Alison's analysis that it is a lack of imagination, rather than pity, that convinces individuals to kill rather than care for the disabled rings true. I would add that it suggests a chilling arrogance for any individual to diagnose the life of another as not worth living.

People with disabilities have an enormous amount to teach us about what it truly means to be human, as the following video makes abundantly clear.